What's conceived bears only a faint resemblance to what's born.  I mean, literally.  A spot of jelly :  a tangle of contradictory impulses, desires, accidents, tendencies, intentions.  A bloody mess.
*
Sculptor Anne Truitt, in her memoir, Daybook, speaks of  "events assimilated with such difficulty that they made permanent plastic changes."  Becoming a mother, she says, is a matter of inviting incompatible realities into one's life.

And here is the sentence she wrote that got me pregnant:  I chose to become a mother because I didn't want to remain unbroken.  I sometimes wonder about that-- that desire to be shattered.  How strong it can be.
I read Daybook the winter I fell madly in love with Tom. We finished grad school, and moved back to the city to work and live.  We stockpiled teeny-tiny clothes.  I quit my despicable office job as soon as I had secured some health insurance for myself, and started staring in-ward for long periods of time.  I folded and unfolded and refolded clothing of surreal proportions.  How could a sleeve be four inches long?  There was an amazing blizzard.  I stared down into the silenced city streets, from eleven stories up. I went into labor.
I gave birth to a complete stranger, with a funny misshapen head, and there were times that freakishly warm June, I think, when Tom and I both looked at Baby #1 and silently wondered how far apart we'd have grown by the time he was ready to leave us.  There was nothing but him for a while.  Sting's '80s hit about obsessive desire might have been about new motherhood-- every move you make, every breath you take, I'll be watching you.
*

You make space in your life to receive Baby #2, whom you've wanted, you've imagined.  But when he arrives, he doesn't fit.  This is the famous amnesia at play.  Imagination and desire keep setting in place these next-to-useless frameworks.  Purpose built never to accommodate anything that lives.
Stare at a light source, then switch it off.  Following intense focus, a kind of after-image.  The wanted, the imagined-- so concretely projected-- lingers.  There are two babies in the brand new crib. One's a ghost, one's a last-second addition.  Look again, there are three.  Four.  One's your own childhood's ghost. There's a whole nest of them.  Right, then.  You gotta do something about that nest you got there . . . .

In the ghost stories I used to like to scare myself with, an act of violence, a buried secret, or injustice has trapped the dead one's soul, like a fly in amber.  Now the living get to know exactly how unknowable a phantom is. It doesn't explain itself, but it doesn't shut up.  It neither reveals itself nor disappears. And there's no one to blame. All a ghost can do is drift about elusively.  All matter is unresolved.  Doors slam.  Weeping is heard.

Ok, sometimes a persistent ghost is only trying to warn you that something terrible will happen, but do you listen?

We made a nest for our dream-baby, and an entirely different creature looked up at us from out of the shadows.

Actually, we inherited a crib, and no one I gave birth to would consent to sleep in it.

Tom and I have both had difficulty.  Hah!  That's such a sterile word for it!  We've died and been resuscitated. We've been zombified.

We've tried to art and do love. For years.  To do art and live in servitude to love.  To earn our keep and the keep of our child, to not sleep but do art, to think endlessly and all the time about our child, our keep, our love, and do art.

What we might write, what we might make, what we imagine ourselves creating--what we haven't made and written from among all that we've imagined.  Can a laptop be haunted?  I have a giant basket of empty, half-empty, still-wrapped, unwrapped and unopened, opened and half-filled notebooks and sketchbooks of all colors and sizes.  Sometimes I go through them-- so many aborted impulses.  Does art have to try to be haunted?

Things have been complicating.  A weird and sometimes distasteful kind of fermentation.  Biological, domestic, anaerobic.  Warm-- oh, overly warm.  And the lighting, too subdued.  You could sleep forever.  If only they'd stop doing what they do.  But it's never, never, never going to happen.  Everything they do they do incessantly.  And everything they do requires a response from you.

Children of a certain age-- they're like army ants.  I had that thought, and it seemed like a very important realization:

If you stop moving, they will climb all over you, and you will feel yourself being eaten up.  It's not an enjoyable feeling when this happens.  It's not nursing an infant.  It's not nesting.  It's being metabolized, transformed. 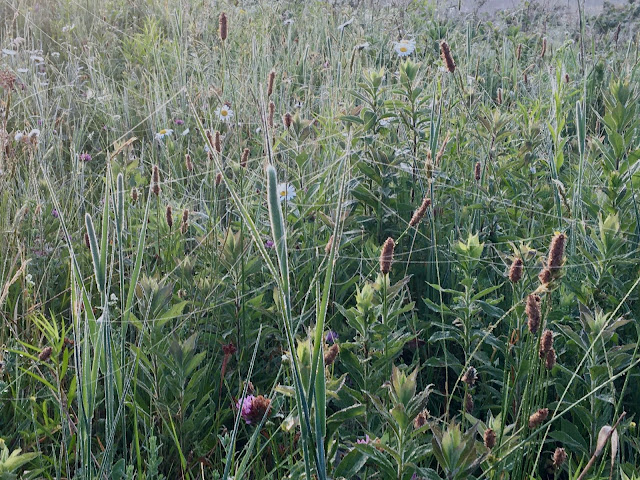 "Her poems embody a more-than-human intensity of presence, and she speaks of her writing as an ongoing “attempt to encounter something that’s not myself and that’s not like myself.”   Rather than “nature poet,” I would call her a phenomenological poet..."