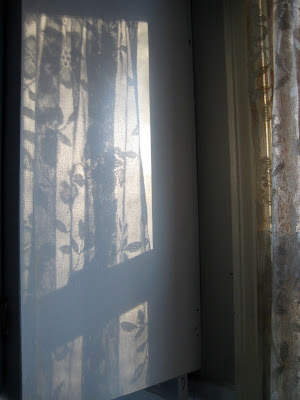 We house-hunted in the months following 9/11.  The first Century 21 agent who drove us around as we looked thought us naive, lacking capital—urban babes-in-the-wood.  He eventually dropped us, skeptical of the disparity between our requirements (an old house with lots of sky above it, with breathing space between it and its neighbors, a working fireplace) and our budget.  We'd also seemed to him, I'm sure, annoyingly nostalgic.  He would show us immaculate (though tiny), spic-and-span, baseboard-heated houses with brand new wall-to-wall carpeting, and we would point to all the creepy, pointy-roofed, turreted things in the listings. We wanted something conceived before the World Wars.  We wanted layers and layers of wallpaper to scrape away or uncover, wood floors to sand or paint.  It was obvious he thought our dream was, well, a dream.  Then the lovely Peggy Muller took over as buyer's agent, and she understood.  I think she saw right through us too, but I think it was an earlier self she saw.  Peggy had moved up from the city's outer boroughs decades earlier, to raise her two daughters, who, she said, turned out never to play outdoors, fearful of the bugs and earthworms in the yard she'd longed to give them.

I was born in the bedroom of an old semi-detached in North London, as were my sisters.  The midwife who attended my mother at each of her four daughters' births wrapped our placentas up in newspaper afterwards, and buried them under the flowering almond tree in the back garden. Through the windows, the tree wavered behind the warped, distorting glass.  The stairs creaked, bats flew out from under the eves at dusk and circled the garden, and for some reason I was certain there were foxes in the upstairs airing cupboard.  The house had what some like to call a "soul."


Tom and I had both grown up in old houses, but our two children were born in a birthing center near our Upper West Side rental.  As they grew, so I grew more and more obsessed with the idea of finding a house.  It wasn't really a matter of space— we're lucky to have a pretty large rent-stabilized apartment.  Was it then that I wanted to be sure my children, after they'd grown up, would never entirely be able to shrug off the spaces of their childhoods, would always be haunted by them? 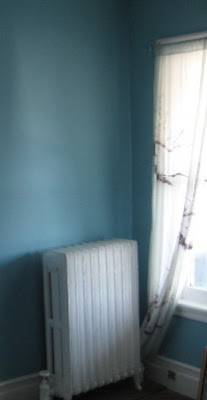 In the familiar fairy story, the pregnant mother of Rapunzel is possessed by longing.  Gazing from her high castle window, she spies rampion (or radishes, in some translations) growing in her neighbor's — the wicked witch's— garden, and is so besotted she grows weak.  Finally, she offers to sell her unborn child to the witch in return for a basket of the vegetables.  This seemed like madness to me when I read the story as a child, but it's the one detail of the story that still remains with me.  Such longings— for what lies over there (wherever you aren't), beyond reach— is so basic to our animal spirit whole religions blossom out from it.


At the center of the human heart is the longing for an absolute good, a longing which is always there and is never appeased by any object in this world, said Simone Weil.  Is it just the wishful thinking of ascetics and saints, this true and virtuous root beneath the brambles of all our material desires?  I don't know, but isn't it true that the things we've longed for are inevitably less beautiful, less satisfying— less desirable—  the closer we get to them?

Our dream house, which I know is a projection, like a ghostly 8mm home movie frame of my childhood house, has just such an elusive and contingent quality.  Our first night in the house, I dreamed I stood watching from the far shore of the Hudson as the house was erased before my eyes—  by a sandstorm of all things!  A dream house undergoes a perpetual process of erosion as a real house replaces it, lath by lath.

Cobwebs and mouse droppings hold the ricketiest parts of the house together, and plywood and ugly anaglypta papers.  We spent all the money we had for renovations on a pair of glass doors, and it was worth it.  You can see the Hudson River through the east facing side of the house, where a cat-pee smelling, astro-turfed mudroom used to be.  But, slowly, a little ham-handedly, we've ripped up the green shag-pile carpets, and the plywood underneath, gotten rid of some of the styrofoam ceiling tiles, taken a crow bar to the composite “wood” panel boarding, banished the scottie-dog light switches, the “Tiffany” Coca Cola hanging lamp in the vestibule. And we've painted over the ominous stain— dark rust-colored— from some incident that, long ago, caused something to drip between the floorboards of the bedroom upstairs, through the dining room ceiling, under the picture rail and down the plaster.  Light from the river ripples endlessly across the walls, stains or no stains.  I can sit and stare for hours at the shifting patterns light and tree shadows make on the walls in the course of a day.

A house has a spirit, too.  Maybe it's not intrinsic to the house.  Maybe it's the product of a reaction between occupant and space.   I sometimes think our house, it's seemingly active and independent-of-us spirit, the mood I sense when I walk into it, is like one of those fortune telling party favors— the red cellophane fish you hold in the palm of your hand. If the fish curls at the edges, you're happy; if just the tail curls, you're in love; if both sides curl in—  I don't remember what that means (do any of its gestures mean gloomy, lonely, bored, exhausted?).  If it flips over altogether, you're fickle.


We've had trouble travelling to and from the house. We've had trouble keeping the necessary car in the city, where our jobs are. The house has seemed a drain on our energy (and, oh my god, finances) and many times we've thought about selling it.  Then we've kept it.  And the economy's crashed, and  houses all around us are in foreclosure.  And still the light ripples over the walls, and we're tenuously hanging on to our jobs, and we're thankful to have this. 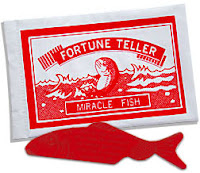